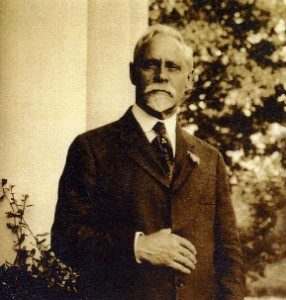 The present Church was designed in the English medieval style by Ehrick Rossiter, a graduate of what is today the Gunnery School in Washington, and Cornell University. After he graduated from the architectural program at Cornell in 1875, Rossiter appears to have apprenticed with Gambrill and Richardson, during the time they were engaged in the design of Trinity Church, Boston. He then went on to practice architecture in New York City from 1877 until 1921, working first with partner Frank A. Wright and later with John Muller. Rossiter designed many buildings in Connecticut, but particularly in Litchfield County and Washington where he designed the Gunnery Schoolhouse, the Gunn Library, the Washington Club, and many estates for his wealthy New York friends who chose to establish their summer residences clustered around the Green, including his own estate, “The Rocks.”

With the burgeoning summer community and the growth of Washington generally, the original little wooden church was soon too small to suit the growing congregation of St. John’s. A larger piece of property was assembled from several smaller parcels immediately adjacent to the wood church. Edward van Ingen, a very successful New York wool merchant, and one of Rossiter’s many wealthy patrons for whom he had designed a house on the Green, was instrumental in acquiring the various properties and when the Vestry voted on September 17, 1916, to erect a new church, he proposed Ehrick Rossiter as the architect. 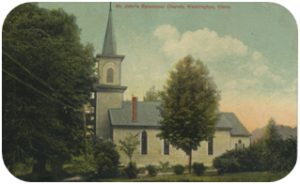 The cornerstone for St. John’s was laid on May 19, 1917, and the building was completed in time for Easter services in 1918. Two years later, Rossiter designed St. Michael’s Episcopal Church, a much larger building, in Litchfield. His designs for these two churches are regarded as “among the best work of his career, confident, understated and inspirational.”1

The stone front steps and the chancel window of the old wooden church were incorporated into the new church.

INTERIOR DECORATION of the CHURCH

The design for the Altar and Reredos of the Church was made to harmonize as well as possible with the early Gothic style of architecture. In designing the decorations for the Church, Rossiter turned in great part to his artist friends for whom he had designed houses on the Green, including Harry Siddons Mowbray, the renowned Orientalist painter, and the artist and wood carver, Herbert Faulkner.

The carved divisions of the Reredos were established to conform to the divisions of the mural’s panels, giving support to the pilasters and arches, thus binding the paintings and carvings into a harmonious whole.

Originally Mowbray’s plan for the decoration of the east end of the chancel consisted of a central triptych immediately over the Altar and a series of four panels on each side.  Of the 21 original paintings that composed the work, only 11 remain; the others were destroyed in a fire in 1941. 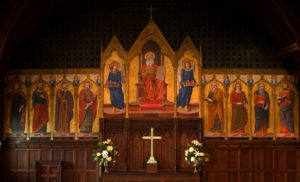 The central figure of the painting is the figure of St. John, depicted as an old man, the St. John of the Revelation, the church founder, enthroned, holding a tablet on which is written: “He that overcometh shall inherit all things, and I will be his God and he shall be my son.”  On his right and left are two angels going forth with the good news, bearing symbolic churches.  To St. John’s left, the right side as you face the triptych, are the figures of St. Peter, St. Luke, St. Matthew and St. Mark each bearing his gospel in his hand.  On St. John’s right, the left side of the triptych, St Paul, St. Thomas, St. James and St. Bartholomew are represented as preachers with scrolls in hand.

In the seven paintings that adorn the side walls of the nave, Mowbray depicted moments in the life of Christ.  The two larger paintings at t west end of the Church, framed in the elaborate Italian style are entitled “The Wise Men” and “The Glorification of Mother and Child.”  The pictures are the gift of the Mowbray family to St. John’s for as long as they wish to have them.  The other six paintings in the series are in the collection of Smithsonian Institute’s Museum of American Art.  Harry Siddons Mowbray, the renowned Orientalist painter, created the nine paintings, especially for the Church.

All of the carvings in St. John’s Church are of chestnut wood and were executed by the local artist and wood carver, Herbert Faulkner, who believed that the purpose of wood–carving was not to produce pictures in wood, but to accent important aspects of cabinet work and furniture with interesting embellishments and to break up monotonous surfaces with a variety of light and shade.  In St. John’s Church, the Altar carving is very simple, the Reredos, progressively more ornate and the border above in enriched with an intricate design…the purpose of which is to lead the eye upward.

The carved panels in the Altar–front are derived from traditional motifs found in Gothic windows, as is the border crowning the Reredos.  English ivy was chosen for the decoration of the spandrels of the Reredos because it is associated with the venerable churches of the Old World.  The carved border upon the beam supporting the organ loft was copied from the Chantry of Exeter Cathedral, England and represents the fruitful vine.

The Stained Glass Window in the Chapel 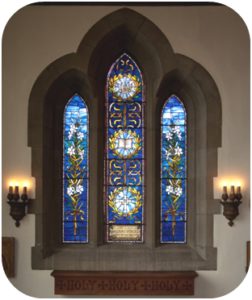 There is some suggestion that the triple lancet stained glass window in the Lady Chapel may be the work of the Tiffany Studio.  The window was given in memory of The Rev. William G. Spencer (St. John’s second Rector from 1888–1895) by his daughter, Amy Spencer Cape Church, and granddaughter, Eva Cape Wallis.  The window was restored in 2011 by J&R Lamb Studios of New Jersey.